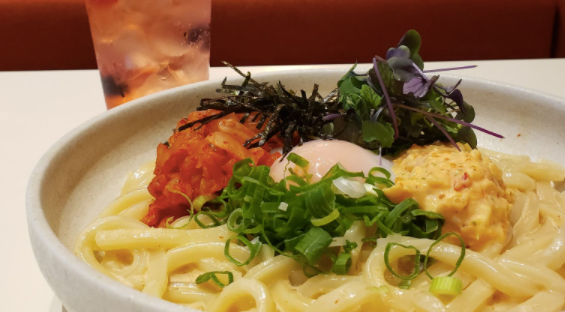 Wes Anderson, modern abstract art, and butter foam… 3 phrases that don’t seem to scream brunch but seamlessly come together in a hidden new gem of Carlton, much like Budapest is the gem of Eastern Europe. One cannot visit the Budapest cafe without commenting on the interior design – how they can do so much with such little space, capturing the inspiration from Wes Anderson’s film, The Grand Budapest Hotel. Bold, offbeat elements like graphic paintings, carved out walls, and the conspicuous SMEG fridge, complemented by an overall natural and earthy palette. I think The Budapest Cafe has just redefined Instagram-worthy. Their menu captures the essence of Japanese fusion: Mentaiko udon, Budapest bruschetta and a matcha hotcake mysteriorly titled “Escape from the Forest,” are just begging to be devoured by hungry customers day in, day out.

The good fat: Before we get to the stars of the show, I can’t recommend the drinks here enough! If the pictures haven’t already convinced you, then perhaps the names will. The peach yoghurt soda has that slight fruity fizziness layered with the creaminess of a yoghurt smoothie. The “Agatha” gives me a summer mocktail sangria vibe, as a rose lemonade dotted with berries throughout. In an age where smashed avo and chilli scramble are common lexemes to the Melbournian Millenial, the Budapest Cafe has one of the most interesting cafe menus I’ve yet seen- a unique blend of Japanese cuisine with Western influences, to create a brunch menu that is just begging me to come back and try MORE, especially after such a positive experience this first visit.

Mentaiko is something I discovered just last year (how sad!) and I am questioning why I didn’t capitalise on it during my Japan trip. The richness of the seafood roe is maximized by the lobster salad, and with the perfectly cooked egg, the creamt mentaiko udon was undoubtedly true to its name. The fresh tomatoes, cabbage and sprinkle of spring onions on the side gave it that extra lightness to balance out the palate. Special mention to how beautifully the egg yolk leaked out as we gave it the gentlest of all prods!

The Tornado omurice was another dish that took me to the streets of Japan – the name is so very fitting with the whirlwind aesthetic of the softy cooked omelette gently perched on top of the flavoursome rice. The savoury, umami flavours of the omurice sauce made it a hearty lunch dish!

As if the main dishes weren’t already a pleasure to eyes, the desserts are somewhat of a theatrical course in themselves. Smash your way through to “Escape from the Forest” with the petite wooden hammer, as the crispy shards of a waffle cone fall on the fluffy stacks of matcha Hokkaido pancakes. Soft airy layers with added crunch is my favourite texture combination and it worked so well in this pancake. The smooth texture and satisfying bitterness of the matcha cream was undercut by the fruitiness of the berry puree and freeze dried raspberries! The latest menu drop for the Budapest Cafe is their “Chocolate Paradise” – an elegant stack of chocolate Belgium pancakes that sandwich the cloud-like whipped cream cheese filling. But my favourite component was definitely the bruleed caramelised banana – there is something so interesting about the combination of a crispy burnt sugar glaze on one side, with the subtle sweetness of banana on the other.

The bad fat: Just because all the other desserts were so outstanding, the chocolate paradise Belgian pancake itself was not as rich as I expected it to be for a Belgian cocoa base, and personally as a big fan of dark chocolate, I would’ve liked it a bit richer!

CHECK OUT THE MENU OF THE BUDAPEST CAFE, CARLTON HERE

2wofatgirls would like to thank The Budapest Cafe, Carlton for the invitation to dine – these opinions are strictly unbiased and were influenced in no way by the collaboration.

HUNGRY FOR MORE? READ ABOUT MY OTHER MELBOURNE BRUNCH EXPERIENCES HERE

LATTE, FLAT WHITE, CHAI, HOT CHOCOLATE... what's your go-to coffee order to start the day? 🌄
Trying one of the healthiest froyo places in the WORLD 🌎
I love contrasting textures in food and @tableofplenty has just launched their new + HEALTHY PANKO CRUMBS - an easy way to add that EXTRA crunch in frying some panko coated prawns 🦐, roasted veggies 🥦 and even ONION RINGS (an all-time personal favourite 🥰)
SHARING YOU MY FIRST spread of many from @grandlafayette featuring all the FREAKSHII (siganture freaky COOL sushi!!) 🍱🍙 we ordered during their night time buffet 😍 - one year on and this is still one of my top recommended high quality + affordable Japanese fusion buffets because for $33.8 the amount of food you can order js INSANEEE 🔥🔥