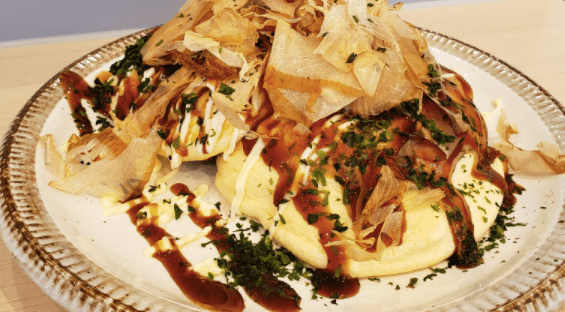 Japan. The destination on everyone’s bucket list “for the food,” but with the year that was 2020, who knows how long where we can blissfully indulge on late-night ramen fixes, 100 yen sushi trains, and of course, the all-too famous jiggly Japanese pancakes and cheesecakes.

Fortunately for us, we managed to squeeze in a Japan trip before COVID-19 blew up, and “A Happy Pancake” easily made its way into our foodie list. Little did I know that I would end up liking a lowkey Japanese pancake cafe 5 minutes away in Melbourne, MORE than Japanese pancakes IN JAPAN. For the ULTIMATE jiggly and taste factor, along with delicious fruity drinks, A Dozen A Dozen in Carlton is the place to go! (Save yourself the $1000 flights)

The good fat: We opted to try both a sweet and savoury option. Let’s just pause for a moment to acknowledge the incredible texture of the pancakes themselves. There is something magical in the batter recipe that allows the pancake to retain its volume and fluffiness. Jiggle aesthetic aside, one bite of the pancake from A Dozen A Dozen takes you to the upper echelon of pancakes. The moisture of the batter, the airy bubbles, and the melting away of the pancake into almost nothing in your mouth, all the whilst with the slight cream cheese flavour residing on your tastebuds… I am so tempted to retry the one from A Dozen A Dozen and A Happy Pancake side by side for comparison again because in my memory, A Happy Pancake did not recreate this same effect!

Starting off with the Japanese Hojicha ($18.5) – there was a generous dollop of lightly flavoured hojicha cream, another jiggle of a hojicha tofu pudding, and for a smooth red bean paste on top. The black sesame crumble gave it an extra little sugary kick.

I’ve always been a fan of savoury desserts and the Okonomiyaki ($16.8) pancake was an obvious choice. This was an impressive flavour creation by A Dozen A Dozen, especially as they seamlessly recreated the okonomiyaki flavours of Japan in dessert form. Once again, with the backdrop being the gorgeous fluffiness of the pancake, the okonomiyaki pancake (ironic right?) featured a light stack of cabbage, bonito flakes and seaweed powder. Of course, not to mention the double duo of Japanese mayo and okonomiyaki sauce – capturing the sweet and savoury creaminess of traditional okonomiyaki topping.

The best part is that none of these flavours were overpowering on the pancakes themselves, complementing them to let the texture of the pancake itself remain the star of the show.

The bad fat: The red bean on the hojicha pancake was a bit sparse and was easily lost within the floof of the pancake. Similarly, the hojicha pudding seemed quite a random (albeit delicious and jelly-like) addition on the side in a plastic container – wasn’t really sure if it was necessary, and by the nature of the presentation, we originally thought it was a dipping sauce of some sort.

CHECK OUT THE MENU OF A DOZEN A DOZEN MELBOURNE HERE

2wofatgirls would like to thank A Dozen A Dozen, Carlton for the invitation to dine – these opinions are strictly unbiased and were influenced in no way by the collaboration.

HUNGRY FOR MORE? READ ABOUT MY OTHER MELBOURNE DESSERT EXPERIENCES HERE

One thought on “A Dozen A Dozen”