Canyonlands National Park was definitely the most relaxing day of our great American road trip. It’s a National Park with a mix of all sorts of scenery divided into 3 districts: Island in the Sky, The Maze, and the Needles. Island in the Sky is the main area tourists go to, with the Needles being suited to aspiring adventurers with huge 4WDs and super equipped for wilderness wanderings.

Naturally we went to Island in the Sky (Map) and was blessed with frozen rivers, sprawling snow-covered canyon landscapes, and even another arch! I appreciate the Grand Canyon for all its immensity and global fame, but in terms of uniqueness and variety, Canyonlands takes first prize. It’s literally a land sweeping full of “mini” grand canyons in the ground, all partly covered in snow! All the major landmarks are reachable just as a viewpoint, so it’s quite easy to squeeze all of them, plus one or two hikes into half a day and leave the rest of the day for the nearby Arches National Park.

Sneak peak into the Canyons behind Mesa Arch

Mesa Arch: Having just spent a whole day in Arches National Park, I didn’t think the Mesa Arch would be able to impress me but little did I know. A 10 minute walk takes you up to one of the most rewarding views of the park. Similar to Delicate Arch, it’s perched on a cliff but a heftier version that you can get up close and personal without fearing for your life. The birds-eye view behind it into the Canyonlands itself makes it a stunning sunrise spot.

Upheaval Dome: The hike up to the first viewpoint is quite steep, and a hiking pole definitely would’ve helped in the snow but we managed! The dome is a crater in the ground that brought back memories of Ubehebe Crater in Death Valley but as a ramped up, snow-covered and more aesthetic version (like iPhone 8 to X) It’s multi-coloured with a darker grey in the middle, surrounded by a rim of that classic, reddened Utah rock. 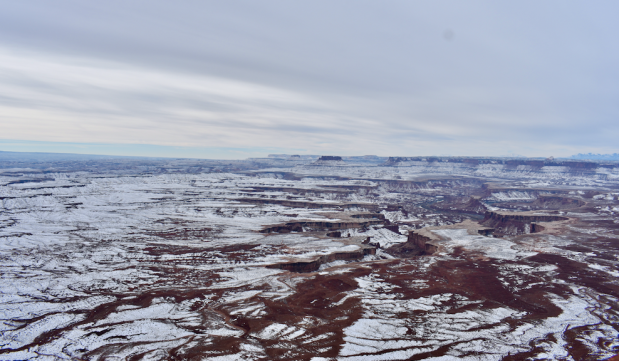 Spy the frozen Green River through this tumultuous landscape

Grand View Point: Make sure to stop at Green River, Buck Canyon and White Rim Overlooks on your way to Grand View point. Green River was a fantastic stop because you could try and spot the frozen river that was partly responsible for creating the stretches of canyons into the horizon. Whale Rock is also a massive, sloped rock face that is a lot of fun to scramble around on. We spent ages taking burst shots of snow-throwing photos up here because why not 🙂 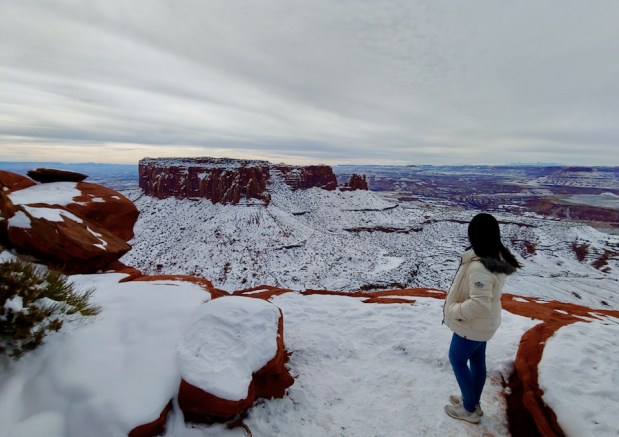 Gazing out from Grand View Point

Grand View Point was a little less climactic than what the name suggested. It was a decent hike out to the furthest point, with a few ups and downs over the rocky outcrops. You could see really far into the horizon but the view wasn’t too different to what we had already seen at all the stops along the way.

The nearby Dead Horse Point State Park (a Utah State Park so the NPS pass doesn’t work – there’s a separate $10 fee) is always a great stop on the way out if you’re not in a rush, for another stunning view of the Colorado River.